At an age where electronic music is everywhere, ZEN Musik surprises not only by its acoustic performance but by its use of instruments not common to the world of pop and rock’n roll. It’s in 2003 that Canadian singer/guitarist Gabriel Locane teams up with Italian flute/harmonica player Luca Scriva to form ZEN Musik. 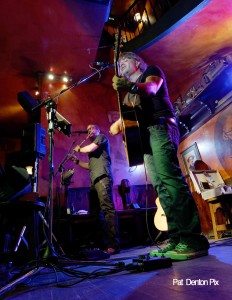 A few years and well over a thousand live shows takes them not only to France, but also parts of Italy, England, Scotland, Germany, Switzerland, Holland, Poland, Spain and even the tiny island of Malta. ZEN has had many guest musicians over the years and has opened itself to a new dimension adding percussions and a now guitar/bass playing Luca to the equation. Based on the French Riviera, ZEN is a creative and fresh approach to live music not only by it’s huge repertoire but also by it’s capacity to create an ambiance catered to every event. ZEN cultivates it’s creativity by stripping down songs to the essential and reworking them into new and different sounding versions. Whether a wild night in a Bar, Pub, Club or any other sort of “special” occasion (weddings, birthdays, corporate parties), or in a more tame and relaxed “lounge” atmosphere, ZEN is a guaranteed success that is sure to be remembered. A proven formula in the past few years. Every show, every event, every song is a special one with ZEN on board. The ZEN effect is unique and only grows as you listen.